The river is at a good level this morning and all areas should fish.  It might be advisable to make the best of it as more rain is forecast to push in from the Atlantic this morning and could be heavy.  It will take very little rain to get the river rising again!

The river slowly dropped yesterday and above the Gweestion came into fly order after several days of high coloured water.  Although the upper reaches were well covered by fly fishers results were poor and I only heard of a couple of fish lost.

Further down river eight fish were reported up to 8pm, mostly on spinner.  Best fish weighed around 5lb.  Many anglers remarked on the amount of fish hooked and lost after a short time playing.  Maybe the heavy peat stain didn’t help?

Yesterday evening I had an unexpected but welcome invite from Mick Kane (Castlebar) to fish the Erriff river.  We were allocated beat 8 at the lower end of the fishery and could fish from 7-9pm.  With high tide around 5pm hopes were high that a few fresh fish might linger in the pools we were going to fish.

We started at the top of the beat and fished our way steadily downstream but had no offers and saw nothing.  Our last chance was in the Coronation pool at the bottom of the beat and although it failed to give up a fish, we did at least see one show.  No fish to show for our efforts but a nice place to spend a few hours trying for one!

Tumbling water on beat 8 of the River Erriff yesterday evening.

Back on EMAA the river held up well yesterday but was steadily dropping by late evening.  Not a lot of anglers fished yesterday but up to 8pm ten fish were reported, with the best weighing 10lb.  Once again with high water spinner and worm were the successful methods.

Frequent heavy showers yesterday continued into the night and this has held the river up, in fact the water will creep up a little as the day goes on.  Another day when worm and spinner are likely to offer the best chance of a fish.

A couple of reasonable days ahead before more rain sweeps in from the Atlantic on Friday.  Anglers won’t be complaining about lack of water for the foreseeable future in fact quite the contrary!  It all augurs well for the salmon stocks as they distribute themselves throughout the system under the safety of the high water.

The river didn’t fall below 1.20m yesterday but some anglers weren’t deterred and fish were caught.  Up to 8pm eight grilse were reported with the best around 5lb.  Worm accounted for most of the catch. 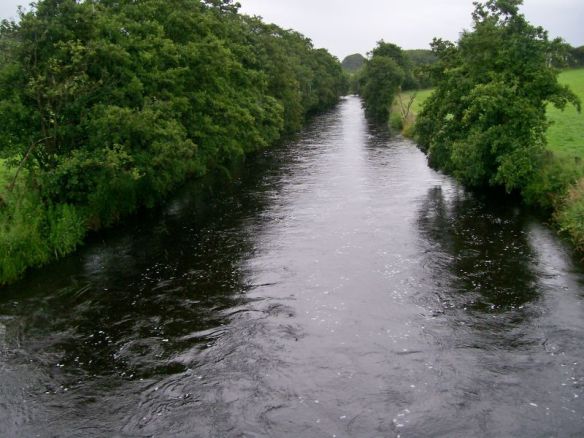 One of the Moy’s main tributaries , the River Gweestion yesterday.

The river is on the rise again this morning,  with heavy showers yesterday evening filtering into the system.  It won’t be a big rise but will ruin any thoughts for fly fishing today.  Anyone out with worm should have a chance with possibly some spinning later in the day.

Showers becoming widespread during the day, with some heavy and thundery.  Top temperature 16c in a fresh northwesterly wind.

I fished the River Derg again yesterday with friend Ronnie Mc Morris.  The river was high in the morning and fell slowly during the day, held up by almost constant drizzle.  Just before 5pm heavy  rain set in and in little over an hour the river was rising again cutting short the days fishing.

I was lucky enough to land two nice grilse of 5lb and 6lb and lost another.   I brought home one for the table, having never sampled a Derg fish before.  Ronnie just had the one pull that failed to hook up.  We only saw the one fish show for the day!

A nice River Derg grilse yesterday just before going back.

The EMAA stretch remained high yesterday, with below the Gub held up by the Gweestion river that slowly rose all day.  Very few anglers ventured out with the adverse conditions but two fish were reported up to 8pm. The 5lb&3lb grilse were caught on worm and spinner.

The river peaked during the night at 1.60m and is slowly dropping again.  Worm will be the only viable option for most of the day, with spinning possible in the afternoon or evening as the  river begins to clear out.

Not a lot of anglers ventured out yesterday but the river was fishable for most of the day and an opportunity may have been missed for a fish or two.  Up to 8pm three grilse were reported caught on bubble and fly.

Big water in Oldcastle earlier in the year.